Master of Speed William Lok on Life in the Fast Lane (October, 2017 GAFENCU ) What was your first time behind the wheel like?

I was 14 years old. I had a job as a paperboy in Canada and I made the rounds by bike in the summer. When it got to be winter it wasn’t so pleasant, so I started stealing my mom’s car. It took a quarter of the time, and for the rest of my shift, I’d take her car for a couple spins. One morning I came home as usual and she was standing in the garage.

We struck a deal that if she allowed me to take my driver’s exam on my 16th birthday [the legal age in Canada], I wouldn’t steal her car anymore. She agreed, and on the morning of my sweet 16, I got my driver’s licence.

Once you started (legally) driving, how did you break into racing?

My mother moved back to Hong Kong when I was 17, which gave me the freedom to start learning about racing. One day I walked into a garage to ask for a job, and one of the guys asked, ‘What are you good at?’ I said, ‘I don’t know, I just love cars. If you let me touch a car I’ll be happy.’

So I started working there as apprentice to the mechanic. After a couple years, the boss of the garage recommended that I go to Portland’s International Raceway for a track day. So I went down there and met one of the instructors, a BMW North America champion.

He taught me proper racing techniques, and at 19, I was offered entry to the BMW North America Junior Programme. The problem was that I didn’t have enough money to join. Working part-time and studying was already taking up a lot of my hours, and back in those days, my wages just weren’t enough to cover the cost.

I didn’t even talk to my mom about it because I grew up in a single-parent family, and a very traditional Chinese one at that – my mom didn’t consider sports a career. After that, I didn’t think about racing anymore. I graduated, moved back to Hong Kong, started my own trading company and became a normal businessman. So what rekindled your dream of becoming a racing driver?

Timing and fate. The end of 2008 was the global financial crisis, so business was not going well for anyone. My companies weren’t doing too bad, but there simply wasn’t enough work for me. To fill my free time, I decided to enter an amateur race in Zhuhai. I hadn’t driven a car on any track for 18 years, let alone that particular track.

That day, I broke the Geely touring car challenge lap record for the track. I thought to myself, ‘If I haven’t driven in 18 years but I can break a lap record, there must still be something there.’

After that, I decided to start doing amateur racing as a hobby. I didn’t do well at first – for a whole year I couldn’t even break into the top 10 of a race. But in 2010 I competed in a GT race and finished on the podium. Standing on that podium made me smile and gave me a feeling I hadn’t experienced since before my mother’s death from cancer in 2004.

Her last words to me were, ‘I’m not asking you to be the most successful man in the world. I just want you to be healthy and, most importantly, happy.’ If my mother could see me now – the fact that I’m doing well professionally and writing history for Hong Kong and Chinese people in motorsports – I think she would be proud of me. Every time I win a race, the first thing I do is kiss my mother’s ring to thank her. You’ve certainly made many motorsport fans in Hong Kong proud. How did your career progress from there?

After winning a few GT races at a competitive level in Asia, I decided to try something with more down-force – we’re talking about the Formula and Le Mans prototypes. When I told one of my friends, he jokingly said to me, ‘Bro, you’re like 40 and you’re trying to graduate to more down-force? The kids are 14 at those races!’ But I figured if I never tried, I would never know. I knew I wouldn’t be a Formula One driver, but who says I’m not a Le Mans driver? Who says I can’t do Indy? I’m happy I went for it, and I’ve worked very hard to make it a reality.

Looking back at what I’ve achieved so far, it’s nothing huge but it’s a good start, and I’m going to keep dreaming bigger. One very important thing in motorsports is that there’s no best – there’s only better. I’ve got to strive for better every time, even if I win a race by a minute, two minutes or five minutes. Being on the podium is nice, but coming in second means you’re the first loser. That’s the ego you need to have to be a champion driver.

Just four months after founding WIN Motorsport, your team went on to win the Asian Le Mans Sprint Cup 2017. How did you feel in that moment?

For me to have a team that just formed this year, and to start in the Sprint Cup and walk away with four pole positions, five wins in six races and one spot on the podium – it’s quite amazing honestly. I can’t thank the team more.

To be able to achieve something like that in the first season is astonishing. But again, we strive for perfection and there’s still a lot more we can improve upon.

My feelings that day were mixed, though. Two weeks before the race, my godmother in Vancouver – who cared for me after my mother returned to Hong Kong – became very ill when her cancer relapsed. I went to Canada to say goodbye, and from the burial service I flew directly back to Hong Kong to compete the next day. It was difficult, but I just took all that energy and put it towards winning the race for her.

I shed quite a few tears when I learned I had sealed the championship. It was an emotional moment. On top of that, carrying the Hong Kong flag on an international stage and showing people that I come from a city where there’s no race track – not even a go-kart track – made me proud to be a Hong Konger, a Chinese and an Asian in motorsports. How did you meet your girlfriend, actress Christine Kuo?

We actually bonded over racing. We have a lot of mutual friends, and each time we met she wanted to know more about the sport. We are currently training her as a development driver, and when we got her on the track we were surprised by her calmness. It’s rare to see that. Motorsports may be male-dominated, but any woman can do it. It just so happens that more men are participating in the sport. But if anything, women drivers are calmer and may even make better decisions.

It’s amazing to see an Asian woman take an interest in racing – especially Christine, a former beauty pageant queen and actress who’s not really the sporty type. Where else can you find such an extraterrestrial beauty who loves racing? I never believed I could find someone like her. I thank my mother for sending an angel from heaven.

There are rumours that you might propose soon. Is it true?

We plan to get married. We want to spend the rest of our lives together, whatever we do. We just need to find the right time. She dealt with some sickness, but now she’s bouncing back in her industry and getting very busy. I’m also racing more and getting tremendously busy. I am only going to propose once in my life, and I’m only going to get married once in my life, so we need to plan it carefully rather than be bound by a timeline. When people ask if we’re engaged, I say, “We haven’t made it official, but in our hearts – yes, for sure.” Everything else is a matter of gesture.

When you want to slow things down, what do you do to relax?

Anything with sunshine and a beach. I don’t even need a mojito – I just need a glass of watermelon juice and I’ll be happy to chill with friends, family or my girlfriend. To me, that’s a perfect day. What’s the next big championship or goal for you?

The next big goal is winning the Asian Le Mans (endurance) Series this winter to gain entry to the Le Mans 24 Hours endurance race. I prefer endurance races because it’s a total team effort, and no one is less than anyone else on the team.

We’re like a family – we play pranks on each other. On the birthday of our chief driver and coach, Richard Bradley, we tied him to a chair on the track and dumped ice water on him. That’s what we do when we’re not racing. But when we’re on the track, we’re so focused that we can’t hear anything except racing language.

My goal is to outdo myself every time I hit the track. I’ll do better than the last race, have a quicker lap time or do a longer stint with more consistent driving. I like to challenge myself. 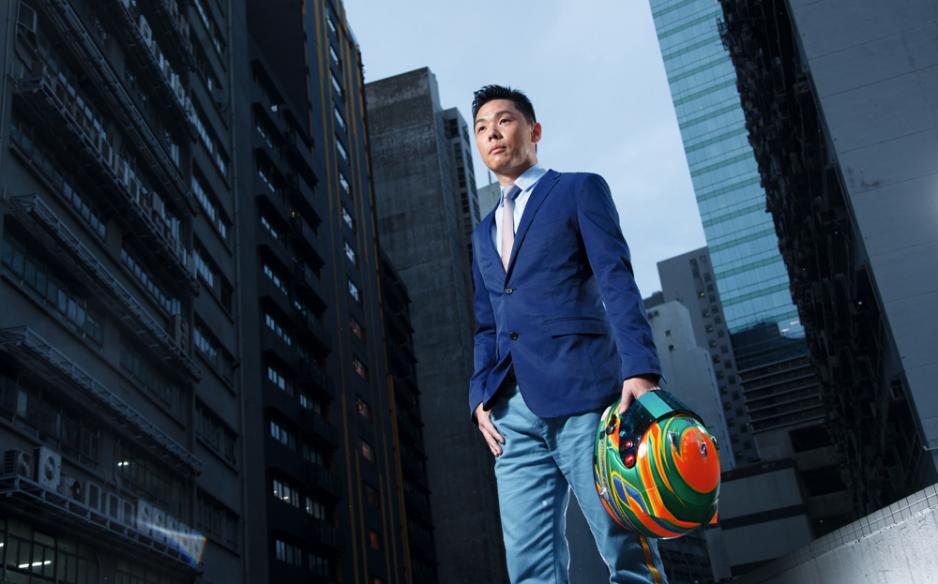 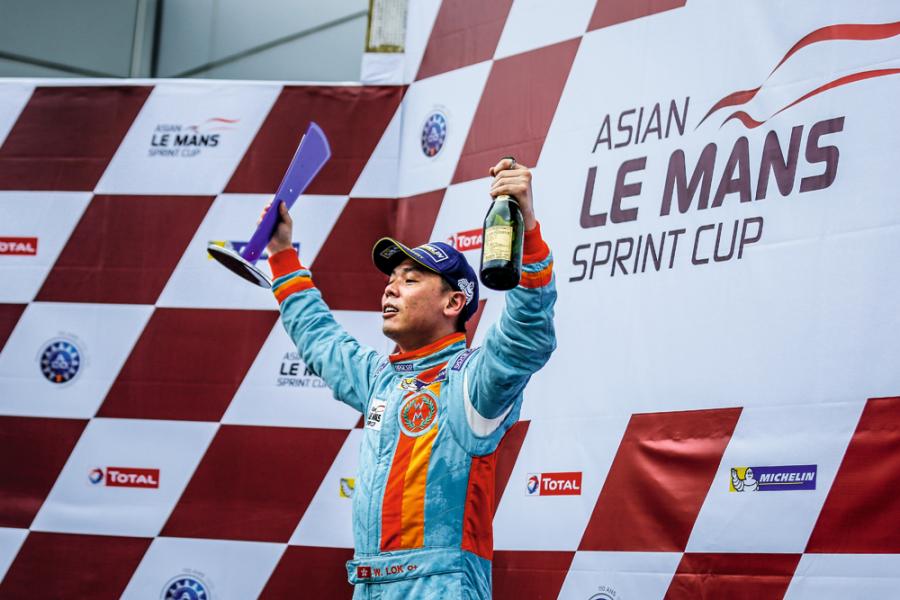 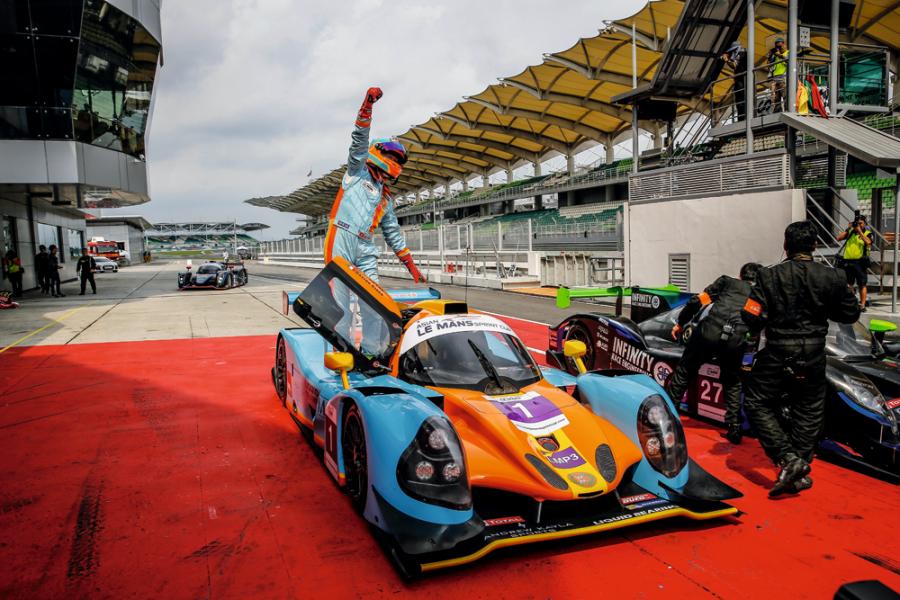 The phrase ‘Car Racing’ has long carried negative connotations in Hong Kong, conjuring images of dangerous street racing and criminal activity. Andy Yan and William Lok, two of the most prominent Hong Kong-based race car drivers, fell the need to clear up straight away the misconceptions surrounding their sport. ‘Our car racing is an absolutely serious activity – we aren’t punks!’ says Lok.

Despite – or perhaps because of – the bad rap and other obstacles, Hong Kong’s fraternity of professional race car drivers sticks together. Between Yan and Lok, there is only a friendly vibe. ‘The racing circle may be small but we are supportive,’says Yan.

‘This is because any success from and driver will only contribute to the community.’

Lok was the first Chinese ever to take part in the 24 Hours of Le Mans, an annual race in France. For him, it was a dream come true to see the Hong Kong SAR flag flying at the French circuit. But all race car drivers inf Hong Kong share one frustration: the lack os facilities. ‘Like all sports, car racing is about practice.’says Lok.’Sadly, there isn’t a decent track or institutional support, let alone sponsorship. Car racing also costs a lot to train. this makes the sport all the more difficult to develop in Hong Kong.’

Yan has been able to realise his childhood dream of becoming a race care driver by training in other places such as mainland China. Macau’s close proximity has also mad it a feasible training ground and competition site. ‘The Macau Grand Prix is well known in Hong Kong,’says Yan.’It took me 11years to win the race and I had tears in my eyes standing on that podium.’

Hong Kong’s motorheads haven’t had a race to call their own – untill this year. For the first time, Formula E will hold its all-electric racing event in Hong Kong, turning the Central Harbour front streets into a two-kilometre track. Perhaps the race will dispel some of the old notions, too, and build greater interest in the sport. ‘If the event is successful, it will strengthen us well,’ says Lok.